HawkEye Pest Control can carry out treatments for all species of pest Ants!

The Black ant is widely distributed around the UK and the rest of the World. They will frequently live in sandy soil, under paving etc. Where they causes little harm.
Problems occur when the 3mm long ants are out foraging for food and enter buildings. As a result they becoming a nuisance and contaminate food. Ants will often form trails from the food source.  For example they usually go for sweet foods.

Nest sites start when a single winged female lays her eggs. She will tend and feed the grubs and larvae that emerge until they become the first workers for the new Queen. Approximately 8-9 weeks after the eggs are laid the first worker ants emerge. Workers will tend to the Queen and subsequent the larvae. As well as foraging for food. Their food will consist of nectar from flowers, dead insects and sweet secretions from green fly.

Mating usually takes place in late summer when males and large females take to flight, they form large swarms, which usually last for 2-3 hours. All the males die leaving a small proportion of mated females to found new colonies.
Because of the location of their nests ants can be quite difficult to control. Their nests can often be located outside under slabs, tarmac or concrete, with little or no evidence of them. 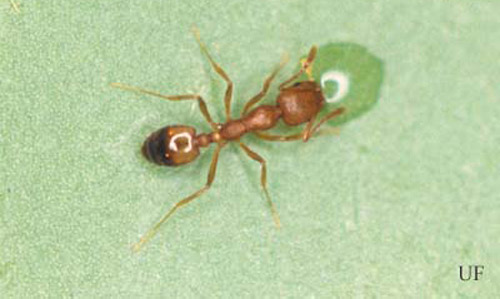 They have a wide range of foraging and their nests are usually well hidden. They are very persistent with large colonies. There are over 8000 different species of ant, the Pharaoh ant being the only one considered to be of significance in terms of public health. Pharaoh ants are tropical in origin and found mainly in large heated buildings in this country.

A Pharaoh ant colony consists of queens, males, immature workers, eggs, larvae and pupae. A colony can vary in size from a few dozen to several hundred thousand individuals. Due to their coloration

The queens lay around 400 eggs throughout their lifetime in batches of 5-10. The eggs hatch in about a week and take approximately 36 days to reach maturity. A queen ant can live for about year and worker ants for 9-10 weeks. Worker ants remove the developing larvae from a nest and form a new (satellite) nest elsewhere.

The behaviour of the workers to the developing larvae determines whether they develop into worker or queen ant. It is the ability of the Pharaoh ant to establish satellite nests in the absence of a queen ant that makes these ants so difficult to eradicate.

Pharaoh’s will feed on almost anything, however prefer sweet and proteinaceous foodstuffs. It is the sterile female worker ants which are most commonly observed as they forage for food, when a food source is found the information is communicated to other ants using chemical (pheromone) trails. Therefore it is common to see long narrow trails of ants moving to and from the food source.

Pharaoh ants are tropical in origin, this is reflected in the fact that they require a minimum temperature of 18°C to breed, with 30° being the optimum. For this reason the ants will inhabit warm areas such as boiler rooms and around central heating pipe work. The large boilers and hot water pipes in tower blocks, hospitals, prisons and factories make them particularly susceptible to Pharaoh ant infestation.

There are no specific diseases associated with Pharaoh ants. However due to their extremely small size they are able to penetrate all but the most secure packaging. This means that they may contaminate foodstuffs intended for human consumption, with pathogens picked up whilst traveling through buildings. Pharaoh ant infestations within hospitals may pose additional risks to human health.

Control methods for Pharaoh Ants can be extremely difficult to eradicate, but control can be achieved by the use of juvenile growth hormone analogues. These chemicals mimic the action of juvenile growth hormone (produced naturally be the ants) and prevent the larvae from developing as well as sterilising the queens and winged males. The use of ant powders or insecticides is strongly discouraged as this will encourage the formation of satellite nests.